Throughout his childhood Bill Litton had a love of competition and just about anything with an engine. At an early age Litton competed in the tough physical and ultra competitive world of Motocross Racing, at one point earning the coveted #1 plate in West Texas (1974). His professional motocross aspirations ended due to a torn ACL in 1976.

Litton at the time owned a 1968 GTO that many thought “was the fastest car in town” in his then hometown of Kermit, TX which is about 50 miles from Odessa TX. 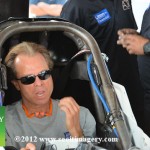 His love for competition and speed quickly turned to the sport of Drag Racing. He attended the Frank Hawley School of Drag Racing in California; in 2003 to earn his competition license under the tutelage of current Nitro Funny Car Driver Jack Beckman to compete in a Super Comp Dragster. Bill’s need for speed was still not satisfied as shortly thereafter, he flew across the country to again attend the Frank Hawley School this time in Florida; to upgrade his license to drive a Alcohol Funny Car at speeds over 250 MPH! The instructor was none other than the former World Champ Frank Hawley himself! All this lead Bill to realize that maybe the best path to success wouldn’t be driving a Funny Car at all? Maybe a 270MPH Dragster world prove to be the best choice to achieve his ultimate goal. He then spoke with Former World Champ and accomplished “tuner” Tom Conway to see about the possibility of driving one of Tom’s cars and earning the proper grade of license to compete in that class as well. This took place the week prior to the trip to Seattle!

Hopefully you can see a pattern developing? Bill has a talent for surrounding himself with good people and enlisting help and advice from the best the industry has to offer in an effort toward the ultimate prize.

This same pattern translates to Litton’s success in the business world. His firm, Litton Financial, holds a position in the top one percent of the largest independent investment brokerage companies in the country.

When the time came for Bill to assemble his “team” to field a competitive car in the Alcohol Dragster category he didn’t have to search far; Anthony Dicero was one of Tom Conway’s protégés, and has crewed for many championship winning teams and drivers like Bob Gilbertson, Morgan Lucas, Tony Pedregon and Don Purdhomme. 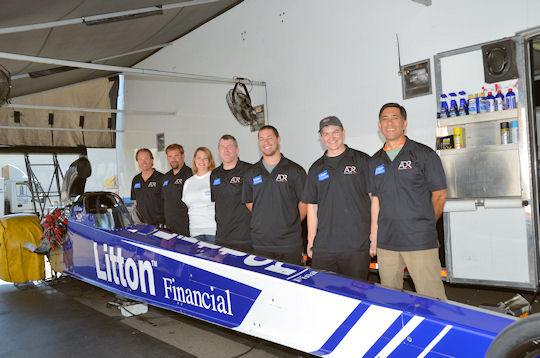 Now with the team assembled the parts and pieces readied and a newly licensed driver ready to go, a plan was formulated to debut the “team” this weekend in Seattle at the O’Reilly Auto Parts Northwest Nationals! The team was greeted by unusual weather with temperatures nearing 90 degrees; Friday’s opening qualifying effort was a 5.60 ET with a speed of 257MPH; which for Bill Litton was a career best! Faster than he had run the week prior during licensing in Bakersfield!

The next round of qualifying was a bit slower 5.70ET as both the track and ambient temperature had risen over the prior round which caused most of the cars in the class to slow as well. However the “bright spot” of this run was the speed was better at over 260MPH! With qualifying now completed, the team lead by Anthony Dicero made the needed changes to prepare for a hopeful first round victory on Sunday!

The Litton Financial Dragster matched up with former National Event Winner, category standout and this weekends #1 qualifier Chris Demke and the Peen Rite Abrasives Dragster of the Maddern Family in the first round of eliminations. Litton’s dragster began dropping cylinders shortly after leaving the starting line as a result the car ran its slowest numbers of the weekend 5.89 at 259MPH. The bright spot is that Chris Demke went on to eventually win the event.

Although there was no outright trophy awarded to the Litton Financial team this weekend, lessons were learned and experience gained toward the goal of Winning the ultimate prize…